“It is the way for the scholar to go forward by devoting himself to learning, cleaning up the body and mind, becoming the right person and brightening the family widely.”
Visit the exhibition halls of "Scholar’s Marriage Ceremony", "Scholar’s Class", and "Introduction/Emission" to experience the lives of young Korean scholars and to think about the answers to current youth problems. 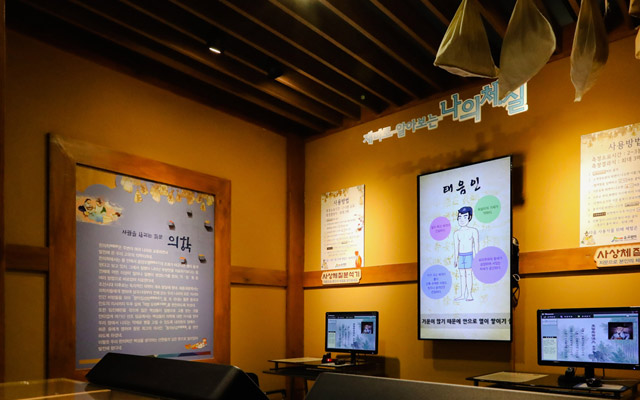 During the Chosun Dynasty there was big interest about astronomy. In the past the farming period was decided based on the awareness of the flow of time and seasons by studying the sun and the stars. Moreover, the good and bad luck of the state was forecasted by looking at the changes in the sky.


Oriental medicine is our original medical science developed through exchanges with our neighboring states. In oriental medical science they say that if the balance of yin and yang five element (EumyangO(five)-Haeng) is ruined one’s body is apt to become sick. Therefore, they examine if there are any diseases and use various methods such as medicine, acupuncture, and moxa cautery to cure them. Since Chosun Dynasty independent our country’s medical science has continued to develop. King Sejong appointed medical doctors to collect all writings regarding medicine as well as secret methods of civilians since the Period of Three States to compile and write the [Hyangyakjip Seongbang]. Also the [Euibangyuchwi] has been compiled and written by observing extensively throughout the domestic as well as Chinese, Indian medical writings.

This place is called Seonghaksibdo, which the term is derived from the 10 paintings Yi Hwang had presented to the young king Seonjo. If you complete the puzzles in the monitor on the side, the door will open and scholar Yi Hwang will appear to explain about Seonghaksibdo. 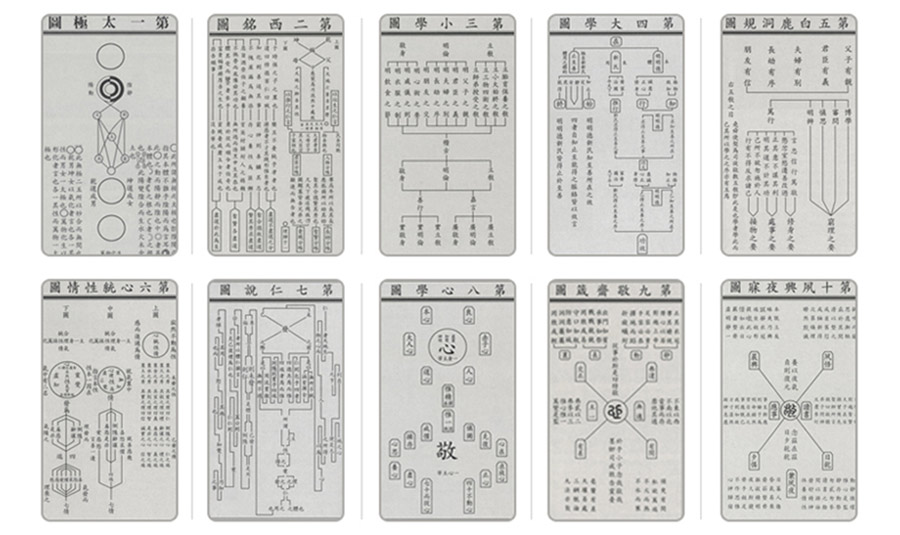 Scholar Jeongyakyong had taught his son that the correct reading method is to "memorizing and not forgetting, and being able to use them when needed".

"Merely reading is equivalent as not reading even if one reads the same words a hundred or a thousand times a day.
When reading, if there is any character you don’t know, you must contemplate, study the character in a subtle manner to realize the essence of the character in order to understand it.
If you read like this every day, reading one book will be the same as reading several hundred books."

"If you read something, but cannot remember or cannot apply the contents when needed, can you really say you have read it? By sewing blue with blue and red with red, and categorizing the materials according to the color, you can always remember the materials and can apply the materials when really needed."

There are 7 basic scriptures of Confucian. (Saseou refers to Daehak/Jungyong /Maengja /Analects of Confucius, and Samgyeong refers to Sigyeong/Seogyeong/Yeokgyeong.) If you insert the book in front of you to front of the monitor you can see the contents of each book.

Can females also be scholars? Yes they can. Although the participation of females in politics during the Chosun Dynasty was prohibited, how can there by discrimination between man and woman in learning the teachings from the sages that are purposed to have such great virtue? Queen Sohye, the mother of king Seongjong had written the 「Naehun (內訓)」 to teach women how to foster one’s character, and aside from her, there were also other numerous female scholars who had great knowledge, virtue and talents.

Yulgok’s mother, Sinsayimdang, was not only a wise mother and a good wife, but was also extremely talented in writing poetry and drawing pictures and therefore left many great works behind, and the poet Heonansilheon gained fame not only in Korea but also all the way to China and Japan.

Also, mistress Jang Gye Hyang who was famous for her virtuous character, had left 「Food Dimibang」 which is the oldest cooking book written by a female in the East, and therefore spread the cooking culture to the future yangban households (noble class). Looking at such female scholars, we can know that females endeavored to cultivate their minds as much as males had done.

As an exam that selected the civil servants to deal with the state’s politics, there were 5 stages which is broken down to the preliminary stage Sogwa(Chosi,Boksi) and the main stage Daegwa(Chosi,Boksi,Jeonsi). The exam was carried out in the form of questioning and answering, as well as writing, and in the final exam called Jeonsi, the king gave a problem that was linked with the state’s current problem and the applicant had to write about it which would be graded later on.

As an examination that selected military servants who would lead the military of the state, there were 3 stages in the exam process which was broken down to Chosi which was the regional preliminary exam, Boksi which was the main exam, and Jeonsi which determined the ranking of the applicants who passed the exam. In the military service examination, the combat skills and methods were tested, and one’s social status did not matter in taking the exam.

Samilyuga was an event where a student who passed the state exam would spend time to the exam test markers, predecessors, and relatives. The person would put the Uhsahwa given by the king on his hat, and wear Engsam which was yellow or jade green and ride on a horse to roam around the streets with traditional music. Also, the person would open a celebrative festival in the village he lived in for three days.

Another Path to Become a Scholar -Cheosa-

The purpose of a scholar taking the state exam was to become a government official to make the civilians live better. However, there were cases where one would stay at their home Villages and five up the government official position if one failed to pass the exam or if one was disappointed with the political situation, and these people were called Cheosa(處士).

Cheosas carried out academic studies and taught students, presented appeals when they deemed the political situation had a problem, and carried out a big part in leading the righteous army to fight against invaders.