“October 1592, to Jinju Castle, where loyalty shines.”
I will say that it is truly loyal and righteous to take the initiative in taking the lead in the crisis of the country. Let's go into the scene of Jinju Daecheop, where the loyalty of the scholars shone. 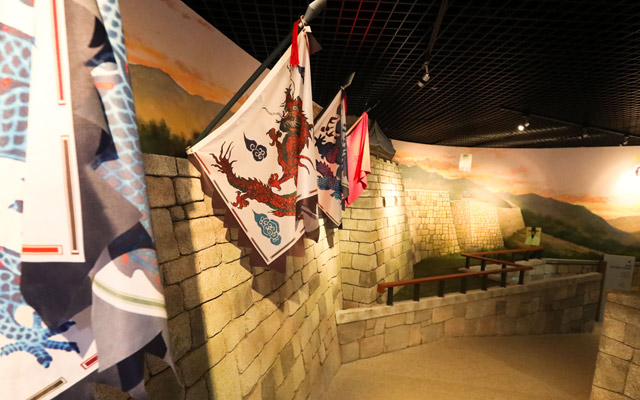 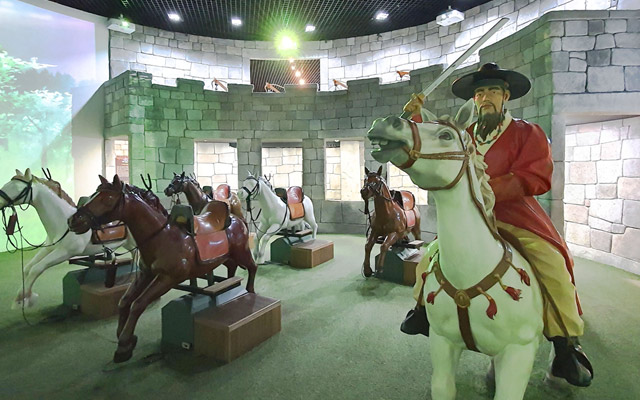 We have provided the display set of the Jinju Castle Battle which is known as the most intense battle during the Japanese Invasion Period. The Jinju Battle is one of the 3 major battles during the Japanese invasion including Hansando Battle and Haengju Battle.

Model cannons that were used during the Jinju Castle Battle are displayed.

Heroes of the Jinju Castle

In the painting in front of you, you can see the hidden righteous army of the Chosun Dynasty. By looking at the scope vision you can expand the characters, and if you click on the character you can see descriptions about them.

Charge! Make a Surprise Attack on the Japanese Soldiers

You can experience the battle by riding on moving horses and electronic arrows where the Japanese soldiers are defeated.
The Japanese enemies are riding towards Jinju castle! General Gwak Jae Woo and his army are trying to make a surprise attack on the enemies so we shall attack them too.

We can experience building the castle walls of Jinju castle which were ruined during the battle.

Everyone!
The castle walls are being torn down because of the enemy’s attack.
Let’s quickly get the bricks and repair the damaged parts of Jinju castle.

State which was Run by Chosun’s Scholars

State which was Run by Chosun’s Scholars

Since the king is at the highest position of a state, can he do everything the way he wants? No! Regardless of the greatness of king Sejong, if there were no Jibheonjeon scholars, then how could Hanguel have been created? Also, if the servants were to unconditionally succumb to tyrants like Yeonsangun the nation’s prospects would be disastrous. Therefore a system where the king is at the center while being surrounded with the scholars’ wisdom was in place to run the state. Then, let’s see how the scholars actually ran the state.

It is a drum placed on top of the Munru(In 1401 outside the palace in 1401 (Chosun Dynasty Taejong 1), to solve the woes of the civilians.

Although there was a legal system of appeals and denunciations at the beginning of Chosun, the state installed the Sinmungo as a facility for final appeals and direct denunciations. The facility was overseen by Uigeumbu Dangjikcheong which was a direct deputy of the king, and when the king heard the sound of the drums he could receive the submittal of the woe of the plaintiff.

In other words, if there were any appeals to be made, they were reported to Jujanggwan in Seoul and to Saheonbu in provincial areas, and for cases that were not able to be solved in these places, they would be passed on to beat the Sinmungo.

The common knowledge regarding the positions of the government officials in the former period can be easily understood by participating in this experience.

The character ‘Chung(忠)’ is composed of middle,’Jung(中)’ and heart, ‘Sim’. It means ‘sincere feeling of the inside’, or ‘equal mind that does not tilt to one side’. A person who has the mind of Chung is honest, sincere and trustworthy. Such people pour in sincerity when they deal with other people or matters . Moreover, being able to sacrifice oneself to do the right thing is called chungui(devotion).

The character, ‘Ui(義)’, is a composed of ‘Yang(羊)’ and ‘Ah(我)’. Wearing a great leather clothing(羊) and having oneself neat represents appropriate attitude and behavior. Moreover, the character also means that one should be able to sacrifice him/herself. In other words, it means to refrain from all personal benefits and to keep the principles in order to protect everyone. It is like social justice.